The good news is that after nine long months of baking pastries and home workouts, the vaccines are finally arriving! In the last few weeks, several world-renown companies, including German-American Pfizer, American Moderna, and the British Oxford-AstraZeneca announced their vaccines had passed the final tests and are going to receive emergency approval to be distributed in the coming weeks, months for some countries. Knowing we can eventually gather and rejoice in the defeat of maybe the most formidable crisis of the early 21st century is nice

However, the most recent research project of MIT Computer Science and Artificial Intelligence Laboratory (CSAIL), points at some dark spots in the face of this victory of science. The researchers of CSAIL claim the current vaccines don’t do as well on non-white people as on the white population. Analyzing vaccine forms similar to the ones developed by Moderna and Pfizer by their advanced Machine learning system, Opti-Vax, they predict that a fraction of percent of the white population will not develop robust immunity to covid-19 after vaccination, contrasting with the much larger value of ten percent in non-white populations.

Nearly all current Covid-19 vaccines are of a subtype named subunit vaccines. These vaccines induce immunity to a pathogen (like the Coronavirus) by introducing some of its components to the immune system, which memorizes the pattern for later encounters. These subunits can be whole proteins or peptides (shorter chains of amino acids that make up proteins like the DNA or RNA) extracted from different parts of the virus. Other vaccines make use of whole -weakened or inactivated- microbe, which is not as safe as the subunit vaccines. This improved safety comes at the expense of less ability to mimic the whole pathogen structure and function and to train cellular immunity. However, not every person’s immune system memorizes the same component alike. In fact, Some subunits do not induce robust immunity in some individuals. Here arises an optimization problem: to maximize the portion of the population for which the vaccine is most effective -population coverage-, by using the optimally effective combination of peptides.

Taking the protein structural data of the first documented case of COVID-19 virus from Wuhan, the team parsed its proteins into short (8-10 length) and longer (13-25 length) peptides: a pool of nearly 150000 peptides, some of which were known immunogenic peptides, and some not. They used the known immunogenic peptides to select and train a model to predict population coverage. The properties of the other peptides were predicted using a complex machine learning system. 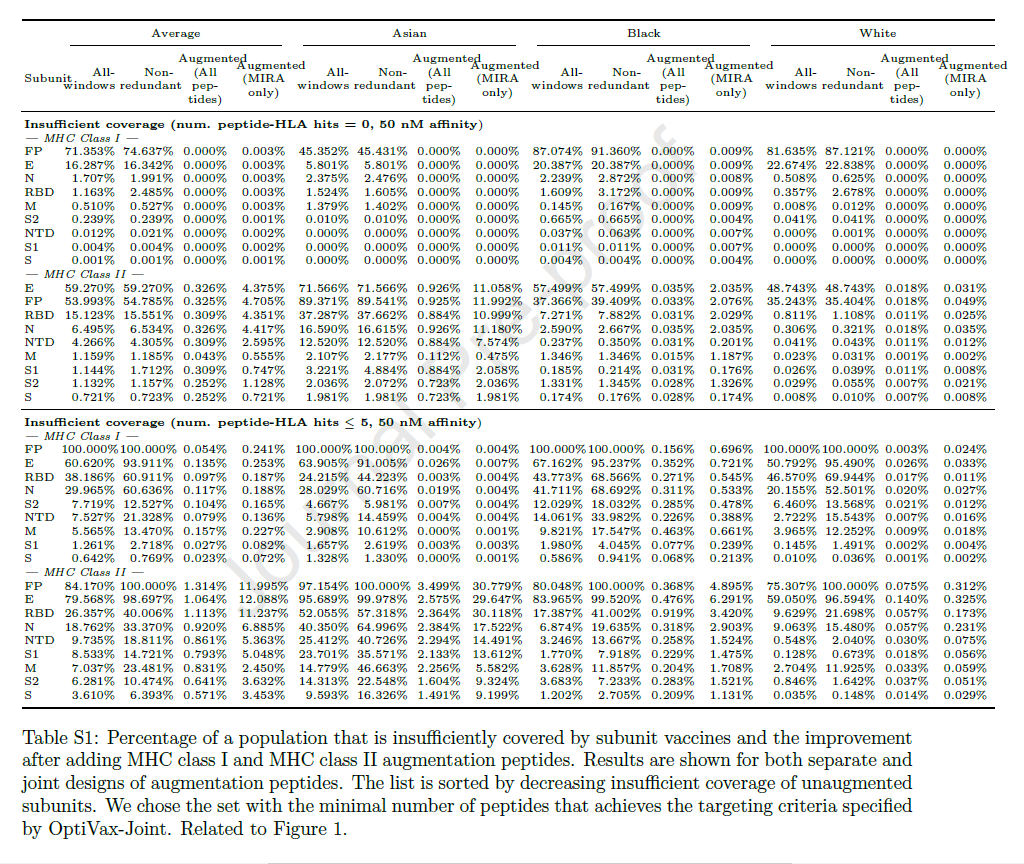 The team used previously-extracted genetic and immunologic data of several thousand self-reported black, white, and Asian people to simulate the effect of coronavirus vaccines similar to those produced by Pfizer and Moderna. They considered nine different vaccine formulations with peptides taken from different parts of the virus’s cell structure.

The results of the study point that the coverage gaps are bigger in non-white populations. As MIT professor David Gifford, senior author of the paper says: “There are obviously many other factors to consider, but our preliminary results suggest that, on average, people of Black or Asian ancestry could have a slightly increased risk of vaccine ineffectiveness, Our work shows that clinical trials need to carefully consider ancestry in their study designs to ensure that efficacy is measured across an appropriate population.”

Finally, the CSAIL team made use of their AI system to augment current vaccine formulae. They used optiVax to reach the optimal combination of peptides which when added to each studied subunit, increases its population coverage to nearly a full one hundred percent and uses the most diverse peptide combination. According to the researchers, the resulting peptide combination effectively describes the cellular immunologic fingerprint of a pathogen, maximizing the number and diversity of the people made immune to COVID-19.

About the Author: Artin